“I don’t care what anyone thinks! If you don’t like it, you don’t have to follow me! I think the world needs to know…”

How often do we all come across a post that starts out similar to this one on social media?  You know the one, where someone is firing off a cannon of drama in their life for the entire internet universe to read. And if we are honest with ourselves we will admit we have thought of doing the same at one point in our lives for one reason or another.

As I scroll through feeds I inwardly cringe when I see these types of post pop up and often I unfollow whoever has posted them. Why you may ask? Because, in reality, whoever is posting that kind of dirty laundry is secretly seeking attention from others even though they may, or may not, be aware of it and the feeds typically take a downward spiral of negativity. I pray for whoever has posted their rant and move on.

I know the feelings behind those posts because I had to battle the temptation of creating them myself for many years following my separation and divorce from my ex-husband. I felt lonely, helpless, angry and a myriad of other horrible emotions that made me want to seek revenge and justice for myself. As tempting as it was, I made the decision to keep my integrity and instead shut down my accounts for a time, so I could heal. After all we are instructed to not avenge ourselves but instead to let God be our vindicator (Romans 12:19).

Voice Your Concerns to God

That did not stop from pacing the little run-down trailer I was living in alone and screaming, crying, and voicing my opinions to God. I look back now and cringe again at how much anger I held inside and the thoughts that crossed my mind, but I knew that God would rather I come to him with all that I was struggling with rather than make a spectacle of myself (Isiah 1:18). Let’s face it if I had decided to air what was going on in mind for the world to see it would have created even bigger problems for myself and I already had more than I felt I could handle. And consequently, others would have probably jumped on the bandwagon with me and just kept that spiral of depression going longer than it needed to go.

Never would I wish on anyone to go through the insurmountable pain of separation and divorce but sadly it happens. It is an all-consuming grief like non-other and while going through it one becomes extremely vulnerable. Thankfully, during this time I head a quote on the radio that resonated deeply with me and has become my life’s mantra.

It was on one of the rare days that I was off from work, I worked 6 days a week during this period for a long time, and I was listening to a teaching trying to quiet my racing mind by Chip Ingram when he quoted evangelist D. L. Moody, “Lighthouses don’t fire cannons to call attention to their shining- they just shine.” In the moment following, I wept bitterly because I felt like my light had gone out forever and I had no way of ever igniting it again.

Recently I had purchased a stack of index cards to write scripture on that I hoped would remind me that God was near. I took one and wrote this quote on it and taped it to the inside of my jewelry armoire, so I would look at it every single morning. It always felt like a stab in the heart for the longest time when I would reach for my jewelry because I no longer wore a wedding band but now when I reached in to get something to wear I had a reminder that I was again going to shine.

It was a subtle gesture to remind myself daily but also a note of caution as well. Anytime I was tempted to go off the deep end of insanity and do something foolish this quote would surface in my thoughts. It was my beacon of hope and integrity to cling to amidst an endless sea of storms. I weathered them and came our far better for having done so and now this quote has taken on new meaning for me.

After all the years of depression, anxiety, regret, self-shaming, and more now I get to quietly shine. Shine for others who are hurting, shine for my children, my husband, and most importantly for my Lord.  If you are hurting take the time to take care of yourself first instead of seeking the instant self-gratification of your version of justice for it is vain and does not address the real need. Seek healthy outlets for your pain and know that in the end, God Loves You! You didn’t earn it, but he loves you for who you are and in time you will shine again.

Do you have to have readings at a wedding? 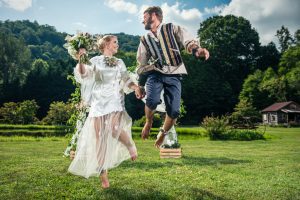 How Can I Make My Wedding Eco-Friendly? Experiencing the Appalachians