The Love Story of Kirsty + Alex

It all started with flys and popsicles! I don’t believe I have ever heard a love story start this way, but it is the truth when it comes to the love story of Kirsty and Alex. I will admit I cracked up when I read that in the email from Alex when they were telling me how they met. The new Mr. & Mrs. Weitzel were married this past weekend at one of my favorite venues, Sky Mountain Events in Asheville, NC.

Alex said that he was the “new guy” in the lab at NC State, and they were looking at flies through a microscope when they met. After their lab, they went with a group of co-workers to get lunch and met over popsicles.

They quickly became friends, and after a year they finally went on their first date together.

When I asked when they knew each other was, “the one,” they said it was a gradual progression, and just knew they would tie the knot eventually.

Alex said that he had been planning to propose to Kirsty for months, and even though she knew it was coming at some time, she was overwhelmed when he did it.

They took a trip to Nashville, TN, and as they were hiking along a river, Alex asked her to marry him at a vista when they were alone.

Alex said he was very nervous, but according to Kirsty, he hid it very well. She was so overwhelmed when he asked that Alex said her “yes” almost sounded like a question.

The One Thing They Love Most About the Other

Alex: He loves how Kirsty always speaks her mind and is ready to stand up for what she thinks is right.

Kirsty and Alex enjoy going to the gym together, playing board and video games, chilling while watching Netflix on the couch and hiking.

They said that the song that best reflects them is “Jackie and Wilson” by Hozier because it reminds them of when they first started dating.

Inspiration for Their Wedding

They felt they didn’t have a theme for their wedding but instead wanted to keep it intimate. They chose to spend it with those who are closest and enjoy a nice dinner together.

They chose Sky Mountain Events in Asheville to host their small wedding because it had amazing views of all of Asheville and the Blue Ridge Mountains. This venue is perfect for those who want to host small events, and Melissa and Joe, who run the site are excellent hosts.

For their dinner, Alex and Kirsty chose the Daphne Room at Twisted Laurel in downtown Asheville. They had leg of lamb, pasta, salad, and other delicious food to enjoy, and the room proved to be perfect for light dancing.

The Daphne Room was a delight with its cozy charm mixed with modern touches of grey velvet and roses dangling from the ceiling over the main bar in the room. I had never been there before, but it will be going on my personal recommendation list.

What Made Their Wedding Different

Another treasure that stood out to me was that Alex’s grandparents could not make the trip to Asheville, so both of his Grandfather’s sent a special memento for Alex to carry with him. One sent his Marine pin while the other sent his Knights of Columbus ring. It was their way of being there in spirit with their grandson.

Furthermore, Alex’s parents have a laser device, and they personally engraved their wedding flutes and guest board they had everyone sign.

I had a delightful time being a part of Kirsty & Alex’s wedding! JJ assisted me throughout the entire event, and we thoroughly enjoyed all the camaraderie of everyone there. Kirsty’s family was from Manchester, England, and I LOVED how they were just who they were without a care in the world.

What touched my heart deeply was how both fathers’ fully embraced both the bride and groom as well as each other. It was an authentic joining of two families, and that is such a rare thing to witness in today’s society. I found myself feeling the elation of every emotion, from tears to laughter.

This wedding was certainly one that will last in my mind forever. Best wishes, Alex & Kirsty! 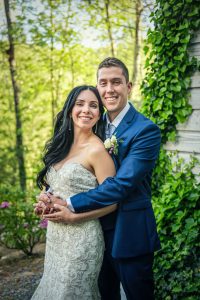 Coping with COVID-19 as a Photographer

Why is family photography important?