Mitch and Luz were among the many couples who had to change their wedding plans due to the COVID-19 pandemic. They were initially supposed to have shared their vows with one another last year at their Air B&B rental in Leicester, NC. Instead, they were legally married at their home and decided to change their ceremony date to this year and celebrate it as their first anniversary with a vow renewal. Mitch contacted me to be their wedding photographer since they did not have one when they did get married.

Their Air B&B was a lovely split-level home with a surrounding farm that made for some fun imagery to have as a backdrop! However, Luz had her heart set on having mountain views in her photos.

I had a previous booking already scheduled before their vow renewal, so I could not arrive at their location earlier in the day as I usually would to accommodate her wishes. Due to time constraints, I had a strict two-hour window to capture everything before sunset.

I can photograph any event after dark because I have three different lighting systems. Still, no system is powerful enough to light up mountains in the distance. The other issue I was running into was the location of where they were staying.

Most people do not realize that Leicester and Asheville are set within a vast valley in the Western North Carolina mountains. While you can see mountains in the distance, they are not as prominent as the Blue Ridge Parkway or the Great Smoky Mountains National Park. In fact, to reach any decent elevation to begin to see these views is a minimum 25-30 minute drive.

With only a two-hour window to work within, I had a few challenges. Since neither of them was familiar with the area, I had to get creative and develop three different timelines to show them some places we could go.

We tentatively settled on one, but I wasn’t entirely happy with it because I knew what Luz really wanted. My previous event that day wrapped up early, and I arrived at their location 20 minutes earlier than I had thought I would.

Due to this small window of time opening up, I came up with an entirely different idea, and thankfully Luz and Mitch were open to it. We were still on a really tight schedule but having complete faith in me, they jumped in their car and followed me around.

About 15 minutes after their ceremony, we took off to a near and dear place to my heart, Hot Springs, NC.

Hot Springs, NC a Place Near to My Heart

As I was growing up, my time was spent 50/50 between Haywood County and Hot Springs, where my maternal grandparents lived. My Grandmother never learned to drive a car, and my Grandfather’s health was in such a state he could not drive. So, every weekend, school break, and summer was spent at their home helping them. In a way, it was a safe and free-range style of growing up nestled so deeply in the hills away from any large cities.

I took Mitch and Luz to some of my favorite places in the quaint mountain town of my childhood. On the way into Hot Springs, we pulled off the road, and I set up my little settee in the area where I picked wildflowers for my Grandfather on the way to his house.

We stopped at the Caboose, and because Mitch was so tall, he could practically lean into Luz even though she was on the steps.

We also did photographs on the walking trestle near where they staged gunfights near the railroad tracks every summer. The town is so tiny I was able to move from location to location quickly. It gave them a wide variety of images for their gallery.

You can even see Lover’s Leap behind them on the main bridge going into the town. Then, as the sun started to set, I told them I had one more place I wanted to take them, which was below the bridge at the French Broad River.

How in the world I managed to create so many images within my little two-hour window is a mystery to me, LOL. Of course, I didn’t pre-plan the timeline for shooting in Hot Springs. I simply trusted my instincts and intimate knowledge of the area. I managed to get Luz everything she wanted, and to me, that is what makes being a photographer worthwhile!

And when she’s not photographing people, you can find her indulging in journaling, reading traditional fairy and folktales, daydreaming, or spending time with her family and her pampered dog, Pixel. 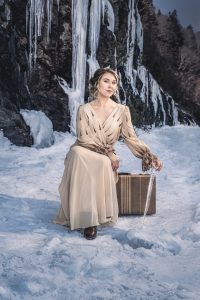 Seeking the Sun | The End of Winter Photoshoot & Story 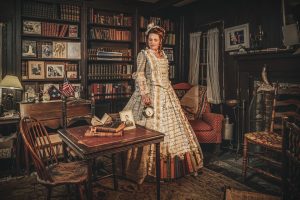 Why are stories powerful? 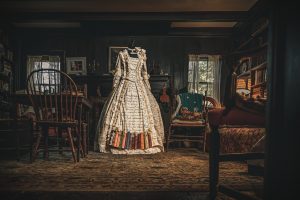